Our beloved stretchy dog is back in a brand new adventure in dessert land![1]

First game in the series to include boss fight, first game with item collection

Silly Sausage: Doggy Dessert is a sequel to Silly Sausage in Meat Land and was released for iOS on the Apple App Store and for Android on Google Play on December 21st, 2016. The game is planned to be released for Android on the Amazon App Store[2] and browser[2]. The player plays as a stretchy dog exploring a dessert-themed land during a dream[3].

Silly Sausage: Doggy Dessert consists of a single level with fifty checkpoints. The stretchy dog acts and is controlled exactly the same as in the previous game. Doggy Dessert introduces challenge levels to the series, which are short levels with a time limit that have a Dog Treat prize at the end. Dog Treat prizes can be collected. 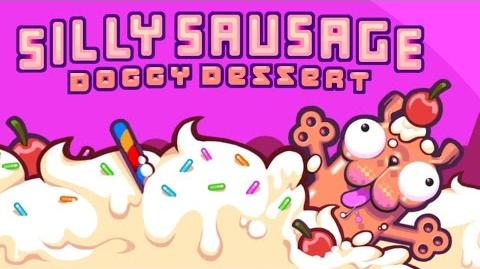 The September 23rd, 2016, preview shows an early layout for the third doghouse area. The doghouse is raised up and there is no red pipe above it, there is no vertical platform, and the top of the destructible column area does not match up in the same spot with the white cream in the ceiling of the level.

The left side of the early third doghouse area

On January 8th, 2016, Romain Macré posted on his Twitter account that Silly Sausage: Doggy Dessert and Meat Land had been featured on the front page of the "Games" section of the Apple App Store[13].

On January 12th, 2016, Nitrome posted on their Twitter account that the game had been featured on the front page of the same app store in the section titled "Play Something Weird"[14].

All toys in Silly Sausage: Doggy Dessert
Add a photo to this gallery

The Xolstar-like spaceship in Silly Sausage: Doggy Dessert
Add a photo to this gallery

Retrieved from "https://nitrome.fandom.com/wiki/Silly_Sausage:_Doggy_Dessert?oldid=205260"
Community content is available under CC-BY-SA unless otherwise noted.