Skin refers to one of twenty selectable themes that customize the colour palette and background of Nitrome.com.

Nitrome's first skin is Classic, launched in November 2006 in conjunction with Nitrome's first site update (Nitrome.com 1.2). One year after the release of Classic, Winter was added to the website during the winter season of 2007.

Around two skins were released every year after 2007. 2011 holds the record for the most number of skins created in a year - a total of five skins. The rate of new skin releases fell after the release of 100th Game: There was almost a year's gap between it and Touchy, which was released in October 2012. Avalanche was released in December 2013, with Ditto released in April 2014. The latest skin is The Bricks, released in January 2015.

Ever since Classic, skins have featured characters from games not yet released on Nitrome.com. Often, this includes the main characters of the game, alongside the game components. Most "hints" in skins are distinguishable from other objects in the environment.

Since Classic, some skins were based on a monochromatic colour scheme. In Classic, the base colour is pink, while blue is the palette for Winter, green for Retro, purple for the Horror, white for Snowman, brown for Factory and red for Jam 2014.

Skins can be selected from the "Skins" page within Nitrome.com[1]. The skin chosen affects the look across the entire site.

On the skins page, an array of thumbnails revealing the different skin options is presented, along with an orange border to show the skin currently selected. Hovering the mouse cursor over a thumbnail reveals each skin's name, highlighted by an orange border around the option selected by the cursor. By clicking on the thumbnail, the skin is selected and will be applied across the entire website. 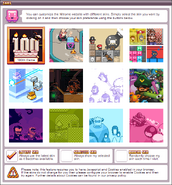 The frame seen around the selected skin

Preference of the skin's appearance can also be selected within the "Skins" page. These settings require browser cookies to be enabled in order for settings to retain themselves.

Retrieved from "https://nitrome.fandom.com/wiki/Skins?oldid=199515"
Community content is available under CC-BY-SA unless otherwise noted.