The snot is the main character alongside the nose of both Snot Put and Super Snot Put, a boss in Nitrome Must Die, an enemy in Hot Air Jr and a ware in Super Stock Take.

The general appearance of the snot is a spherical green head with a general Cuboy face - two horizontal oval shaped eyes with a tiny green pupil, a mouth appearing as a dark green ninety degrees flipped D. The bottom of this mouth features a light green tongue, while on either side of the mouth are two pink spheres for cheeks.

Attached to the head is the tail of the snot, this tail appearing as the general tail of a droplet - an isosceles triangle (Δ) that has its lower sides curve up at the base. At first, there is a lot of distance between the two curves, by the higher the lines curve up, the less space between both lines, until the sides curve up and connect.

The snot loses the semi-triangular appearance of its tail, now having a long oval shape.

The appearance of the snot has not changed much from Snot Put; it is given lighter colours, more noticeable pupils and a white oval a bit above its head.

The balloon of the snot - obtained upon completing the level it appears in - also is very different that its regular appearance, this balloon having a red tongue and black pixels underneath its eyes, and completely lacking a tail, the remnant of its tail being the small pushed up part at the top of its head, something exclusive to this balloon.

Only the head of the snot appears, this head resembling the snot's balloon head in Hot Air Jr. The head is more different than previous depictions of the balloon, likely due to the artist who did the head of this balloon being Giuseppe Longo instead of Stefan Ählin.

The colours for the head of this snot are more similar to the colours of the first depiction of the snot - this snot having lighter lime green colours that previous version. It also has pinker cheeks. In game, the snot will continually move down, which will squish its body. Upon this happening, its head will quickly come back up, to start the movements over again.

In Snot Put, the snot is first seen dropped out of a nose. The player then is to pick up the snot and hurl it as far as possible. This can be done by the player clicking on the snot to remove it from the nose. No matter where the player clicks on the snot, it will transport the mouse to the tail.

After they clicked the snot, the player must hold the left mouse button to make sure they keep hold of it. After that, the player should throw the snot as far as they can by holding dragging the snot quickly across the screen and then letting go of it.

Snot will also appear hanging on trees and bridges between hills in the background.

A snot on a small tree

Two snots on a large tree

Two snots under a small bridge

The snot returns in Super Snot Put, functioning the same it did in Snot Put. Some new physics have been given to it, such as the ability to bounce and how snot splatters from it when it hits the ground.

In the background, there are also lots of objects that are covered in snot, such as pipes, blocks, and vents.

A small pipe with snot

A medium sized pipe with snot

A large pipe with snot

A block with snot

A vent with snot
Add a photo to this gallery

The snot appears once in Nitrome Must Die, in the battle with the nose (floor ten). It is flung from the nose's nostrils, where it will then bounce around the screen until it is destroyed.

Snot makes a cameo in Hot Air Jr as an enemy as the first cameo in the Hot Air series. The snot will fall all the way down from the nose at the top of the level, almost touching the bottom of the level. Upon reaching close to the ground, the snot will move back up in short spurts, going up, then stopping, then advancing up again.

Due to the snot going down a small chasm, there is restricted space to advance up a side when next to snot, unless the player moves slowly. Doing the aforementioned way of advancing through the level is actually possible, only it requires the player to move very slowly and constantly stay in one small area.

Upon completing the level, the player unlocks a balloon that features the head of the snot. This balloon, unlock the previously unlocked balloons, is not perfectly circular and has a small bump at the top of its head.

As an unlockable balloon in Hot Air Jr.
Add a photo to this gallery

In Super Stock Take, a snot appears as the ware the player has to collect for level twenty-one. Upon collecting it, the sound of the trumpet from Snot Put is heard, and the level ends. Rarely, liquid snot is seen on some blocks.

The snot in the Party skin 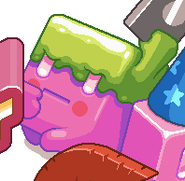 The snot in the Touchy skin

Retrieved from "https://nitrome.fandom.com/wiki/Snot?oldid=202663"
Community content is available under CC-BY-SA unless otherwise noted.