Snowman is a skin released on December 10, 2009. It is the last Nitrome skin to have a base colour and objects and characters coloured in that base colour.

On the Eskimo snowman, there is the Eskimo with her grappling hook on a victory flag, as well as an antler ape. Behind the yeti snowman (on the right hand side), the yeti is being held by the giant. On the Viking snowman, there is a frozen Viking with two green lizards, one of which has its tongue stuck to the frozen Viking. On the penguin snowman, the penguin on toboggan is sledding down the right slope. There is also a snow castle, meant to appear as the castle from Tiny Castle. This is because it is considerably smaller than the other snowmen, and the knight is standing outside of it. Also, there is a snowman in construction in the middle of the skin, being built by the demolition crew. The half-built snowman is simply a round dome which has nitroglycerine and a portapod with Larry on it. Nearby are the other demolition crew members, one of which, Barry, is in a cement mixer cannon. Also, there are two Barrys in the skin.

On the ground, there are many Nitrome characters. Starting on the left, there are the green and yellow cavemens, who are shooting a woolly rhino which has a target and and arrow in it. To their right is the cave girl with the parasite on her head, infecting her. The parasite had just jumped off of a brute, which can be seen, dead, to their right. Right in front of the yeti snowman, two miners can be seen, one of which is being suffocated by Captain Tongue. Above them are several bats. On the far right side of the skin, there is a group of penguins. There are penguins from Snow Drift and the penguins from Avalanche, including the penguin on toboggan. The yeti can be seen kicking one of the Avalanche penguins. Near the penguin group is a group of Vikings, one of them being frozen by Jack Frost. To the right of them is a rabbit out of its hole, as well as two other rabbit holes, which are near a tree. There are also many trees in the background, behind the snowmen.

In the air, there are also a few Nitrome characters. To the far left, there are rabbits falling from the sky. All of them calm and have their ears out, except for one, which is crying with its ears up. To their right is Rockitty, who is flying towards the right. Finally, on the far right is the new born sun, which is moving towards a line of stars on its left. 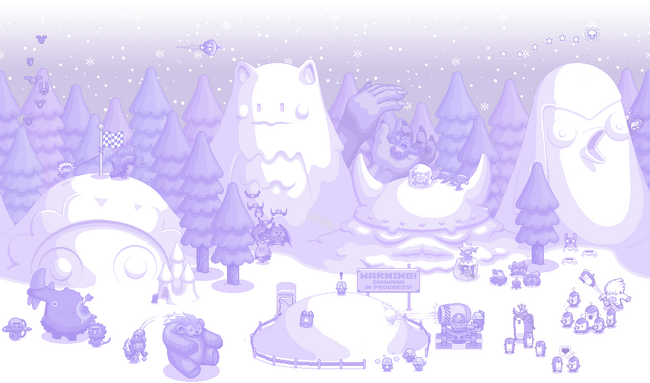 On December 16 2013 and December 14 and 22 2014, Nitrome hid three avatar gifts in the Snowman skin, obtainable only by those who had a Nitrome account. Clicking the gift grants the viewer an avatar.

Retrieved from "https://nitrome.fandom.com/wiki/Snowman?oldid=202402"
Community content is available under CC-BY-SA unless otherwise noted.