Squish blocks are enemies in the game Enemy 585, being the first enemy introduced in the game, and a sub-boss in the Nitrome's 100th game, Nitrome Must Die.

Squish blocks are angry grey blocks with spikes around them. They have two eyes, a mouth, and freckles, all of which are brown. They also have a bandage on their forehead and sixteen white spikes, four on each side.

Squish blocks will automatically fall down in this game, then bring themselves back up, then repeat the process. They stop falling if Turner is in its path when the squish block falls.

Moving in a square

The squish block appears as the third and last part of the boss battle on floor thirty in Nitrome Must Die.

The squish block appears small in Nitrome Must Die, smaller than its Enemy 585 appearance.

The squish block appears once the crusher guardian is destroyed, and follows the exact same movement of it - moving across spiky areas, up, across, down, repeating the pattern. The squish block, due to its small size and significantly smaller speed, is hard to hit with bullets. The best way to kill it is to stand on the below middle platform, and fire when it comes by. 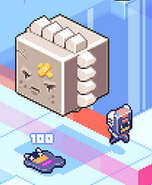 In the Ice Temple skin

A squish block as a papercraft

A squish block going up

A squish block going down
Add a photo to this gallery

Retrieved from "https://nitrome.fandom.com/wiki/Squish_blocks_(Enemy_585)?oldid=185294"
Community content is available under CC-BY-SA unless otherwise noted.