Not to be confused with Steampunk.

Build epic tanks from scrap to destroy rival tanks and salvage their equipment!

First released real time strategy game.
Steamlands is a real-time strategy game released on April 18, 2011. The player controls a tank, traveling throughout New Britannia fighting to defeat the Pirates, an organization that roams around the land. Guns, armour and upgrades for equipment can be bought throughout the game to strength then the armament of the player. The game was in development since October 2010, which is longer than most Nitrome games. This game, along with twelve other games, was made a distributable game on August 25th, 2011, and was one of the first distributable games.

Mouse on steering lever - Move tank back and forth

Z and X - Move tank back and forth

Levels are determined by small red dots on a map with a mini tank similar to the ones shown on the Ice Temple Skin. A red flag on a dot represents levels the player has successfully completed. The map may also split into two different paths, of which the player can choose which opponents they want to fight.

The player enters the level with a tank that they usually custom-build before the game begins. As they move along the path, another enemy tank will begin to attack. Using the cannons provided, as well as the default coal catapaulting attack, both players attempt to destroy the other's tank first. Upon destroying one tank, the player may move on to attack another enemy tank. After a level is successfully completed, the player gains money, counted in British Pounds, depending on their damage control.

Some levels also include shops at the beginning of them, where the player can purchase items to upgrade their tank's attack and defense or buy game hints or flags. When a flag has been bought, players can also customize it to their liking and save the flag on their computer.

Guns are the weapons in Steamlands that the player places on their tank to protect them from other hostile tanks. There are many guns in Steamlands, and Damage, Health, and Reload increasing upgrades can be bought to make them more powerful. Guns that fire in an arc take up 2 spaces, except for the Mandelbrot, which takes up 3 and the Zeus, which uses 4.

A special level editor was included, allowing players to make custom maps, levels, tanks and more, then save it for future use. At first, it was not revealed on the Nitrome blog, but could be activated by entering a special key combination at the title screen.

A further update on August 5, 2011 provided an icon that could be clicked to activate Dev Mode instead of having to input the Konami Code. At the same time, players were also encouraged to submit their own created levels to be included in the Steamlands game.

Throughout Steamlands there are shops, located in almost all levels of the game. The player comes to a shop right before starting a level. The player can buy armor increasing upgrades for Armour, Tank Advantages, and Guns, and Reload and Damage increasing upgrades just for guns, among other purchasable upgrades for tank objects in Steamlands, suing there obtained British Pounds in the game.

Shops are run by Shopkeepers who will often times offer advice, called Gossip. Gossip is the cheapest item in shops, costing a lowly ₤50. Some Shopkeepers will offer advice on the upcoming levels, Guns, strategies, and sometimes just offer useless advice about the town they live in.

For the article on the flags in Steamlands, please see Flags

The Flag Designer is a tool the player can use while in every shop in Steamlands. The Flag designer allows the player to draw a design on there flag that will be seen while the player is fighting in levels. The player can select a coloured background for the flag - either black, red or orange - and draw a design using three coloured pens.

Other tools allow them to fill in areas of there flag. The player can save a flag to their computer and upload or upload on into the Steamlands game. The player can also buy pre-made flags for ₤100, in either red, black, or orange, but these flags cannot be drawn on.

A Teaser for the game was first released on September 17th 2010, on Facebook and the Nitrome.com Blog, revealing the first Teaser Image for the game. It is the first blog post released after the 2 month Nitrome game drought. Below is the blog post that accompanied the image:

I'm sure a lot of you may have noticed and some of you have emailed us about a drought in Nitrome's productivity of late. Well just to put your minds at rest we are not on holiday and we have all been working very hard! We currently have lots of great games both finished and at various stages of production and some of them will be released shortly.

While you wait for the first of them we thought we would wet your appetite with a tease at something we have in the pipeline. We're not going to spoil it by giving away many details but this particular game is strategy based and has been in production for a fair amount longer than our average game so you should hopefully find it extra special!

Five days later, Nitrome released a bigger picture of the game, different from the Teaser image. Oddly, this post was posted only on Facebook, and not on the Nitrome Blog, due to unknown reasons.

In December, on Aaron Steed's blog Robotacid, he posted how hard it was developing the game, and the actual Genre of the game. Below is the post:

“At work at Nitrome I’ve been working on a beast of a game. It’s been months in the making, and has changed my workflow to resemble something more like MVC. One of the big problems in the Actionscript mindset is extending DisplayObjects. You lose control of the rendering. By shifting over to a pure copyPixels model that’s separate from your object updates you get full visual control and you no longer have to waste time updating objects simply because they’re wired into Flash’s rendering model.

The gameplay of the game I can’t go into, but here’s the screenshot we released on Facebook and the Nitrome Blog:

It’s the first RTS by Nitrome. I honestly thought I hated the genre, but I’ve discovered that RTSs are fantastic fun to code and my homework (Plant vs Zombies, StarCraft 2, Eufloria) have converted me to the cause. I can only hope that this is the beginning of a franchise.”

The word "Clicky", on the Robotacid post linked to the second picture in the gallery below. Although not known, it is theorized production of this game started in July. If this is so, it might be one of the longest Nitrome games to have been developed.

About three months later Nitrome provided a Tutorial on how to make levels in Steamlands, They also announced they would update the levels of the game with fan made levels, Player's could then send there levels in to Nitrome as an XML file.

Nitrome released a trailer for the game on March 8th 2011. The level involves the player's tank going through a level and destroying three enemy tanks. 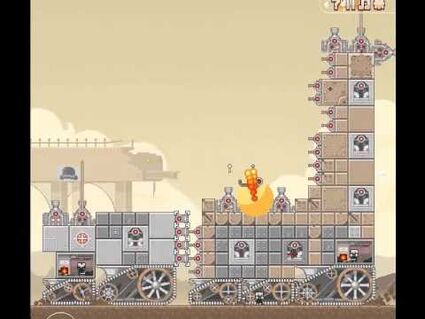 Nitrome released a second Trailer for Steamlands on April 12, with commentary by Mat Annal and Aaron Steed . The Trailer was released almost a month after the first Trailer. Mat explains the gameplay of Stemalands, reveals the shop, and the inspiration behind Steamlands. 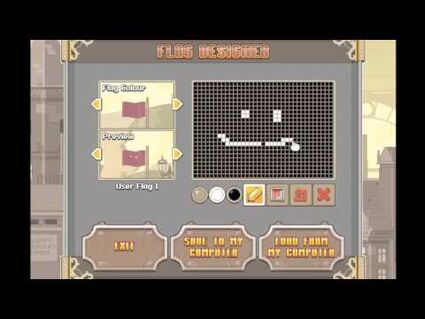 Nitrome made this trailer and released it along with the post telling fans about the updates to Steamlands. The video is 12 minutes long and is a tutorial on how to make a basic level in Steamlands. 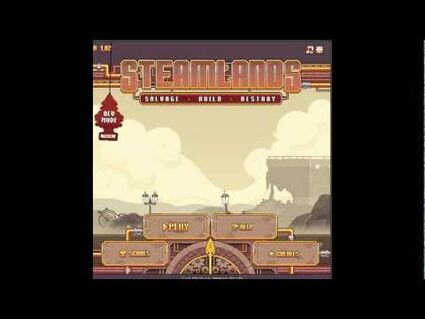 There are three versions of Steamlands released. They are not separate games, but updated versions of the games.

Version 1.00 is the very first version of Steamlands released. It was released on April 18th 2011. Although nowhere inthe game is it called V 1.00, Nitrome made updated versions of Steamlands called 1.01 and 1.02, so technically there is a 1.00, which is the first version of the game before updating. Dev Mode could be activated in V 1.00.

Version 1.01 is a patch in Steamlands and the second version of the game. This patch was released on May 3rd 2011, and fixed glitches and also tweaked so other parts of the game. Auto Drive-out was added, but this did not appear on levels with no enemies. A confirmation prompt was added to the Unlock Everything button in Dev Mode, which prompted the player that they were going to erase there save data in the game when activating Unlock Everything. The Game Ending animation was also added, which could be seen by completing the level "The Pirate Commander" or by changing the Congratulation Type of levels from None to Pirates Defeated.

Version 1.02 is a patch released for Steamlands and the third version of the game. Version 1.02 was released on August 5th 2011. The patch included 3 new weapons: Catherine, Dragoon, and Infestor. The Valentine also received a makeover, with a smaller chain and increased base. An Air Fresher shaped like a tree was added, so instead of inputting the Konami Code to access Dev Mode, this Freshener could be clicked instead. With the inclusion of the Freshener, inputting the Konami code no longer accesses Dev Mode.

On August 31st, Nitrome humorously made the Dev Mode Freshener look like the logo of a Car Company. The freshener had the appearance of the logo of a certain car company. This icon was soon recognized by the company, and Nitrome was kindly asked to remove it, which they did. This incident was posted on the Nitrome blog on September 1st 2011.

Español
Community content is available under CC-BY-SA unless otherwise noted.