Not to be confused with Steamlands.

Steampunk is a skin released on April 18, 2011 to coincide with the release of Steamlands. The skin is set in the Steamlands environment, with Steamlands characters and tanks fighting. This skin is the first skin to be based off a game, the game being Steamlands.

The skin is located in New Britannia, as two tanks and a giant robot resembling Magneboy battle in the wastelands. Several missiles and saboteur jumpmasters are falling to the ground. Amidst the combat, two Grapplers chase down a repair men near one tank, and two guards are chasing Dirk Valentine. 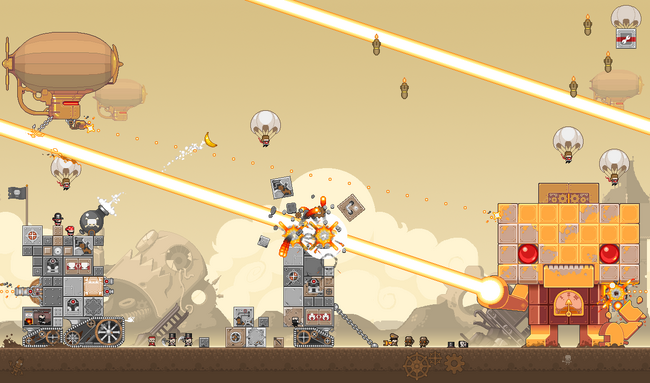 This skin does not hint any games.

On July 12th 2013, Nitrome hid an avatar gift in the Steampunk skin, obtainable only by those who had a Nitrome account. Clicking the gift grants the viewer an avatar.

Retrieved from "https://nitrome.fandom.com/wiki/Steampunk?oldid=202406"
Community content is available under CC-BY-SA unless otherwise noted.