Nitrome Wiki
Register
Don't have an account?
Sign In
Advertisement
in: Articles with incomplete sections, Stretch Dungeon, Games,
and 9 more

Tap to stretch the walls as you bounce around and fall through the dungeon.[1]

First endless game to have stages

Stretch Dungeon is an endless platforming game that was released for iOS on the Apple App Store and for Android on Google Play on September 7th, 2016[3][4]. The game is planned to be released on the Amazon App Store[2] and on browser[2].

In Stretch Dungeon, the player can enlarge certain surfaces of each stage to guide a prisoner past obstacles. Points are granted based on the numbered markers that the prisoner passes through. Once the player reaches a certain amount of points, the prisoner is transferred to a next stage, with a change in environment as well as the hazards and interactive objects that appear. The presentation and order of the obstacles is randomised and changes when the player restarts a new playthrough.

Players have the option of unlocking shortcuts to start at the beginning of another stage. This requires that players will have passed the required number of checkpoints in the previous stage, as well as paying a certain amount of gems to make the shortcut accessible. Scoring will only count from the stage in which they start at.

There are a total of four stages in Stretch Dungeon. Each stage has its own set of level designs, hazards and obstacles, though some components from previous stages may carry over to subsequent ones. Each stage will continue for a certain amount of points before leading the player to a pipe, which will take them to the next stage.

Although the player must pass the necessary number of markers to view the ending, players have the option of continuing the game after this point, cycling from the first stage again to the final endlessly until the prisoner dies or the player quits.

The default stage where the game starts. The stage lasts for 15 points.

This stage lasts for 20 points. The shortcut to this stage can be unlocked by paying 200 gems.

This stage takes a place in a sewer whose walls are more slippery than other stages that the prisoner slides faster on them. The shortcut to this stage can be unlocked for 400 gems. This stage lasts for 25 points.

It is called Prison Grotto in Google Play version.

The final layout in the game, taking a place in a dark dungeon. The shortcut to this stage can be unlocked for 600 gems. This stage lasts for 30 points, whereupon the ending is encountered. After this, the game continues from the first stage. 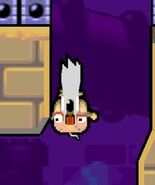 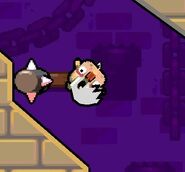 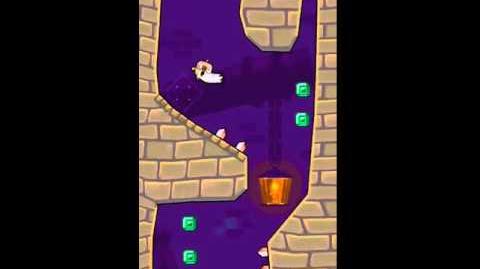 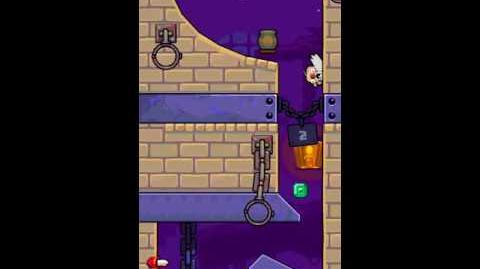 Development of Stretch Dungeon had started by December 25th, 2015[5]. Images of Stretch Dungeon were first shared by Romain Macré on his Twitter account on February 6th, 2016[6]. The game was revealed by Nitrome on February 12th, 2016, in the form of a short video[7]. The game had been finished by May 30th, 2016[8] and had been submitted to the app store it was going to be released on by June 13th, 2016[9]. On July 1st, 2016, Nitrome posted on Twitter a short video of gameplay from Stretch Dungeon[10]. On September 5th, 2015, Nitrome posted on Twitter that the game would be released during the week and posted a video of the game[11] The game was released on September 7th, 2016 on the Apple App Store and Google Play[4][3].