Sucknblo (working title) is a cancelled platforming game revealed on a Memory Lane Nitrome blog post on September 6th 2012. The game was cancelled in early stages as it "wasn't much fun".

Although information about the game was first revealed by Nitrome, the game's artist Simon Hunter had uploaded a screenshot of the game to his personal website prior to the Nitrome blog post, though this image was taken down (along with others) months before the Memory Lane blog post was posted.

- Unknown, but possibly this allowed the player to duck or perform some other unmentioned action.

It is not revealed in the document what action is mapped to the appropriate the arrow/WASD key (aside from the space bar), it is assumed here what the action is because of the setup of the level and WAD/↑← → being for jumping, moving left, and moving right, respectively (since this setup is most common).

Sucknblo is a platforming game with the objective of each level being to kill all enemies.

The player is armed with a weapon called the push beam that is activated via the spacebar and used for killing enemies. Although the beam does not inflict damage, shooting this beam at an enemy would cause the enemy to lose its footing, presumably pushing it in the direction of the laser beam.

If used on an enemy long enough, the enemy would lose its grip on the floor and be crushed against a wall (due to the force of the beam). Alternatively, the player can push the enemy with the push beam into a trap that would kill it. Force fields - objects planned to be in the game - "interrupt the range on the beam", this possibly meaning force fields would prevent the player's laser from moving farther.

Some levels would feature poles that enemies can grab on to to prevent being crushed against walls. Enemies were not defenseless, some would fire bullets and possibly use other attacks. Enemies were also planned to have behaviours of varying complexity, some basic behaviours serving as the foundation for more complex versions of the behaviour.

Seen in both screenshots are orbs with a electric field around them. It is uncertain what these may be, but it is possible that these are the mentioned "traps", which enemies could be pushed into to be killed. It is also possible these would transform into enemies, as many orbs in the mock-up shot of the game provided on the Memory Lane blog post have been replaced with enemies in the Simon Hunter image.

Nitrome did not cover that the game's hero has only three health blocks and how possible collision with enemies lessens this bar, though these were not covered probably because they would be assumed by the audience.

The image found on Simon Hunter's website showed the platforms of the level being blue instead of brown, as the platforms were brown in the Memory Lane image.

Months prior to the revealing of Sucknblo, Simon Hunter removed this image and many beta images from Nitrome games and art he had created for other companies, effectively only showing his work he had made for Nitrome.

It is interesting to note that the score for each screenshot is the same, along with the setup of the level (minus the enemies). 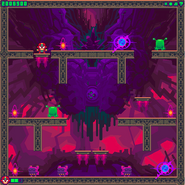 The image provided by Nitrome for the Memory Lane blog post 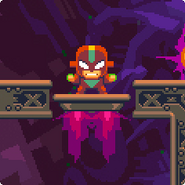 The superhero protagonist
Add a photo to this gallery

Development of the game started in October 2009. During this month the game's initial tech demo was created, along with presumably art for the game. Because the tech demo proved to not be much fun, the game was cancelled. At this point the game was still early in development.

After the game was cancelled, development of Avalanche was started as the development period for Christmas game had started. Development of Sucknblo was stopped prior to October 29 2009, as Aaron Steed mentions working on Avalanche at this point. [2]

Retrieved from "https://nitrome.fandom.com/wiki/Sucknblo?oldid=207846"
Community content is available under CC-BY-SA unless otherwise noted.