Super Feed Me is an upcoming mobile game and the sequel to Feed Me. Although the game's core gameplay is not yet known, it is known that the player plays as a venus fly trap navigating through levels. Super Feed Me will expand on the main ideas of Feed Me (released in 2006), Super Feed Me introducing new features and enemies.

Development started in September 2009[1], with the game being unveiled on March 8th, 2010, at the Flash Gaming Summit. Despite optimism for the game, poor management of the project[2] and a long development time[2] caused it to be put on hold in 2012 in favour of Icebreaker A Viking Voyage[2]. Following the release of Viking Voyage, Nitrome's enjoyment with developing other games caused them to not return Super Feed Me[3]. Nitrome is not ruling out that they will never return to the game[4], presumably due to shifting to the Unity engine.

All controls for the game are not currently known.

Super Feed Me is a platforming game that is level based, with the player trying to reach a designated end point in each level.[6]

Biting allows the venus fly trap to bite and hold on to platforms[5], eat bugs[7], and also interact with certain objects through biting them. Biting on to the top of a lever allows the player to pull back or push forward the lever[8]. Also, the player can bite and hold small objects in the venus fly trap's mouth[9], these objects able to be spit out again[9]. It is not known what actions the player has to perform to spit out other objects.

Bugs in Super Feed Me can be eaten by biting them[7], but unlike in the first game the player will not be able to increase the length of the venus fly trap's neck.

Super Feed Me's new physics engine allows for more fluid movements of sprites than in the original game, along with sprites being able to react more fluidly to impact with the environment and other solid objects. With this addition, the venus fly trap's neck has more freedom in movement and is able to bounce, bend, and move based on the movements of the player's head. At a certain point in the game, the player will be able to grow a second head[10].

The venus fly trap's pot is capable of moving, instead of being completely stationary as it is in Feed Me. In Super Feed Me, the player's pot will be able to tilt, rotate, and move based on the player's movements and also through interactions with the environment.

The venus fly trap traverses levels by biting on to surfaces, and then contracting its neck to pull its pot toward its head.

Biting in a far away direction will cause the venus fly trap's pot to tilt in that direction, or move, even though the player has not bitten on to anything.[12]

The levels of Super Feed Me are filled with interactive objects for the player to use, along with lots of bugs, and sometimes hazards. Levels of the game will take the player to different places, such as the greenhouse, a desert, and an underground cave/sewer, with area-specific objects and enemies.

A new addition to the Feed Me series is the concept of bosses. Currently, the only known boss is a moth fought in the sewers area.[13][14]

Development of Super Feed Me started in September 2009[1]. Nitrome's decision to create their (at the time) first mobile game using the Feed Me series instead of a platforming game was because they wanted to create something that worked naturally on iPhone/iPad, and thus wanted to avoid a virtual d-pad.[15] The neck extension function of Feed Me was not used in Super Feed Me because it did not add much to the gameplay of the original Feed Me. [16]

The game's trailer was unveiled on March 8, 2010 during the Flash Gaming Summit.[17]. Prior to the game's unveiling, an iPhone game was hinted around Nitrome.com in the form of an advertisement of an iPhone with a question mark on it. Following the game's reveal at the Flash Gaming Summit, the game was unveiled on the Nitrome blog on Nitrome.com[1]. Although the game was less than 20% complete at the time[18], Nitrome was optimistic about the game being released by the end of the year.[19]

The game's trailer caught the eye of Apple, who would consider promoting the game if it "played as good as it looked", although Nitrome had to unfortunately turn down this offer due to the inability to make a working demo in a short time, and also because levels were incomplete and some components required further development.[20]

In summer 2010, Nitrome devoted a lot of time and effort to working on Super Feed Me, assigning a large amount of the Nitrome team to work on the project[21]. This development stretched from late July to early October, and was evident due to the lack of any blog posts on the Nitrome blog during this time.

Although development on the game progressed a lot, Nitrome unfortunately had to momentarily cease work on the game[22] after these two months, as at this point Nitrome's revenue and site visitors were declining.[23] Nitrome decided at that point to not work on Super Feed Me until they had a steady release of flash games[22].

On May 31st 2011, Nitrome released a video updating Nitromians about the state of Super Feed Me[24]. Nitrome shared that they were looking for an iPhone programmer, who would allow Nitrome to continue work on Super Feed Me without affecting the development of other projects[25]. At the time of publishing the video Nitrome said they were currently not working on Super Feed Me but work on it would continue in the future[26] and that the game had been worked on considerably since the release of its trailer[27].

No information on Super Feed Me was disclosed until May 25th, 2012, when Nitrome said that the game was on hold[28]. On July 17th, 2012 Nitrome elaborated on Touch Arcade that Super Feed Me had been put on hold to work on Icebreaker: A Viking Voyage[29].

Reasons for Super Feed Me being put on hold were not only so that work could be concentrated on Icebreaker A Viking Voyage, but also because the development of Super Feed Me was poorly managed[2] and was taking a long time[2]. It lacked organization[30], a set plan[2] and a designated end point[2]. The project was also hindered by its endlessly stopping and starting[2], which ultimately caused key members to lose faith in the project[2]. The game's programmer was one of these members, and he eventually left the project[31]. Along with this, not all of the Nitrome team were working on the game[2].

As of 2020, Nitrome is currently not working on Super Feed Me. Originally this was due to enjoyment with working on other games and not wanting to return to an old game[3], but as of December 2014 it is due to a lack of time that the game is not being developed, as the game is planned to be very large[32]. However, the game is not cancelled[33]. When Nitrome does return to making the game, development will be restarted and the graphics overhauled[34][35], and will be remade with the Unity engine, though Nitrome will still use some content made prior to the game being put on hold. [34] In addition, the game will likely be made for both iOS and Android.[36]

From the updated website, the player is trying to get a venus flytrap out of captivity[37], however, it has not been announced if this is the same venus fly trap as seen in Feed Me, or if it takes place after or prior to the events of Feed Me.

This demo will be different from demo games released on Nitrome.com, as these current types of demos are created and released in order to gain feedback on the game while Nitrome is making it. Considering Nitrome's opinion that demo versions of their premium apps (excluding Nitrome Touchy) would harm paid downloads[39], it is likely that something like this will not be done when Nitrome's returns to making the game. 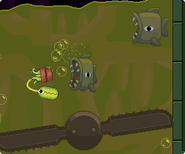 The first screenshot revealed of the game 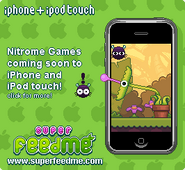 The temporary advertisement for the game in the Nitrome shop 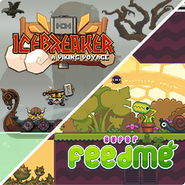 The image in the iPhone section of Nitrome.com that lead to Super Feed Me.com

The large iPad on Super Feed Me.com that states the game is on hold
Add a photo to this gallery

The mystery iPod that was teased on Nitrome.com prior to the revealing of Super Feed Me

The second advertisement, released after the revealing of Super Feed Me
Add a photo to this gallery 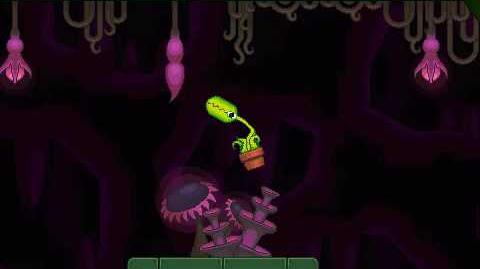 Based on a popular flash game with over one million views on its YouTube trailer to date. Developed from the ground up specially for iOS devices.

Retrieved from "https://nitrome.fandom.com/wiki/Super_Feed_Me?oldid=206754"
Community content is available under CC-BY-SA unless otherwise noted.