Nitrome Wiki
Register
Don't have an account?
Sign In
Advertisement
in: Articles with incomplete sections, Leap Day, Games,
and 24 more

Super Leap Day is a platforming game released on August 6th, 2021[1], on Apple Arcade for iPhone, iPod Touch, Mac, and Apple TV. It is a sequel to Leap Day and like that game features a daily level.

The game is game controller compatible.

In Super Leap Day the player plays as a Contestant and is tasked with reaching the Gold Cup at the end of the level. The Contestant automatically moves and can jump, wall slide, and wall jump. The game's main feature is that it features a new level each day. Each level consists of vertically oriented and sidescrolling level segments and has a specific theme that influences some of the game components that can appear. Fifteen checkpoints are present in each level, which are activated by touching the checkpoint flag. Once activated, the player will respawn there when they die. Trophies are present at five-checkpoint intervals.

Each level also has two non-gameplay rooms: a "Tomorrow on Leap Day" room that shows what the theme for the following day will be, and a "coming soon room" that shows content that is planned to be added to the game. If the player dies a certain amount of times at any point in the level, the Referee will appear and help the player.

Like the original, levels are constructed by using a seed created based on the game's date, which then determines what game components to use for the level[2]. An overview of how levels were constructed in Leap Day can be seen on the Leap Day article.

The game has unlockable bonus games.

The game has a shop where new characters, character upgrades, and bonus games can be purchased with accumulated gold coins. The following shop items have prerequisites before they appear in the shop and can be bought: 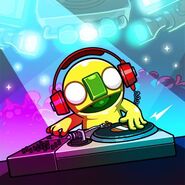 The following updates were released prior to the game's release.

Note: For the linked patched note sources, some pages only list part of the patch notes and the rest can only be seen via use of the inspect element browser tool on the patch note text.

The two-headed ostrich that had been created in early mockup art for a potential Leap Day sequel prior to one being considered was later resurrected for Super Leap Day. It was planned for the Rainy Ruins theme but could not be included due to the breadth of game content already in the theme[19].

Prior to a sequel to Leap Day being considered, Mat Annal, one of the original game's artists, created some mockup art for a potential sequel over the Christmas break in late December 2018/early January 2019[20][21]. Super Leap Day was announced on July 6th, 2021[22], and released on August 6th[1].

Super Leap Day incorporated several ideas and game components that Nitrome were unable to implement in content updates for the original Leap Day due to its outdated engine[23]. Unlike prior Nitrome games, all of Super Leap Day's art was hand drawn[24], a design change that stemmed from Nitrome wanting to try out other art styles[25]. This game also marked the first use of vector graphics since Chick Flick in 2006.

The engine for Super Leap Day was created before the game went into development, which was some time before January 2019[21]. At the start of development, the game was not planned for Apple Arcade as this was before the service was revealed[26].

Dave Cowen, the game's composer, did more music that was not included in the game[27]. Nitrome mentioned that no release on other platforms is planned due to the game's contractual exclusivity with Apple Arcade[28].