Defeat your rivals in this Two Player spin off from the Test Subject Series!

Test Subject Arena is a platform multiplayer game released June 15, 2011. It is meant for two players, each who are placed in different "arenas" with the aim of shooting each other within the designated arena.

The game is Nitrome's first ever multiplayer game to not have a single player mode, deeming it a multiplayer only game. Because it is a spin-off, the game does not involve the story as seen by the previous games in the series.

Controls can be adjusted with the setting. To adjust an action, the player has to click a button with the button command for the action, then press the button they wish to assign the action to. Below is a list of default controls.

There are fourteen playable stages in Test Subject Arena. Because it is a multiplayer only game, no unlockable stages exist. Players can pick one of the stages or click the Random button, which randomly selects a stage for them.

At the start of each stage, both players are spawned out of a spawn cylinder with a goo holder that is half full. Both players now have to work their way around the level and attempt to shoot the other player. When the opposing player is killed, whether by the other player or a hazard or an enemy, the opposite player receives some extra goo in their goo holder while the other player loses a portion of their goo. The game ends when one player has depleted the other's goo supply or if time runs out. If time runs out, the player with the most goo in their compartment is declared the winner. 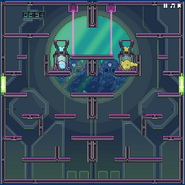 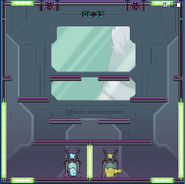 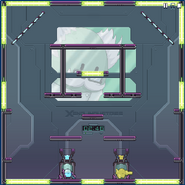 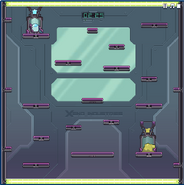 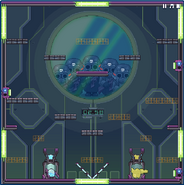 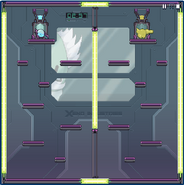 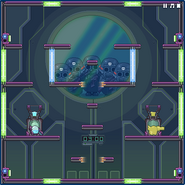 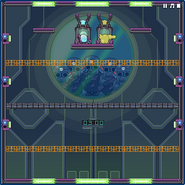 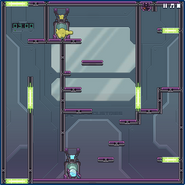 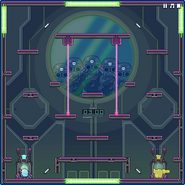 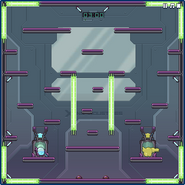 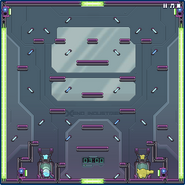 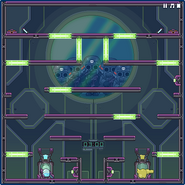 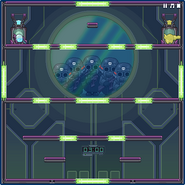 Level 14
Add a photo to this gallery

Description: The last of the latest adventure.


This stage is cluttered with many platforms, big; small; or L shaped. Each player starts on opposite sides of the stage, close to each other but separated by a few big platforms. Both players can take a shortcut through a platform above them, a jump away, but risk getting hit by Lasers. It has the same layout as the last level of Test Subject Green, but without the enemies.

Description: Not just about each other!


A simple level. Green Teleporters taken up most of the walls and take up a small section of the floor. Players are separated by a Green Teleporter when they start. A few platforms are placed above the players. Two Detection Proton Cannons are placed on the ceiling, protected from attack and overseeing the few platforms. Players have to be careful while fighting on the top platform to avoid getting hit by the bullets from the Cannons.

Description: Watch where they go!


Many Green Teleporters appear on the walls. 3 Platforms only appear, two horizontal ones, one the holds a Green Teleporter, and several very small platforms branching out from the wall. Two horizontal lines of Mirrors appear at the top of the level. Battle on the top platform can easily become dangerous as Proton Bullets rebound off the Mirrors back into the battle.

Description: No floor, no ceiling.


This level has the floor and ceiling replaced with long Green Teleporters. Several platforms big and small are scattered throughout the level. There are no hazards or other interactive objects in the level. Also, the level isn't symmetrical and neither sides are a mirror image of each other.

Description: The one with the moving portal.

Description: The one with the switching portals.

All hazards will kill any player if contact is made with them.

Objects that can help the players.

Enemies can harm both characters.

Idle walking
Add a photo to this gallery

An AI opponent was created at one point during development but was scrapped due to being too complex to program in the time allotted for work on the game[2]. Prior to being cut, the AI could move but could not do so competently and struggled with choosing when to fight or run from the player[2].

When asked about what was used for the voice of the announcer, Nitrome replied that it is "probably" the text-to-speech program that comes with every Macintosh computer[6].

Test Subject Arena was made Nitrome Touchy compatible on August 16 2013.

Retrieved from "https://nitrome.fandom.com/wiki/Test_Subject_Arena?oldid=205086"
Community content is available under CC-BY-SA unless otherwise noted.