Make your way through the ever changing level to save the princess?

One level consisting of 8 checkpoints

Tiny Castle is an action-platform game released April 6, 2010. The player is a knight whose goal is to try and rescue a princess locked in a castle.

can also be used to interact with teleporter skulls.

There are nine levels in Tiny Castle, displayed as checkpoints that allow game play to be continuous.

Go up a ladder then go left and up another ladder. Go right, jump over the gap, go down the staircase, smash the wall, then go down into the room. The player will now come across a serpent creature, which is optional to kill. Smash the wall, jump over the two spikes, go up the ladder, then the other, now push the switch.

Walk off the edge, then when the knight touches the ground, jump over the spikes. Grab the key (killing the monster is optional), and run straight all the way over to the flashing yellow door. Unlock the door, run foreword, go up the ladder, and kill the monster if it is in the knights way.

Go up the other ladder, up the staircase, and up the next ladder. When at the platform connecting to the ladder, jump over the gap, smash the wall, and go up the ladder. Smash the green crystal ball (smashing all of them is needed to progress to the next checkpoint), kill the creature, and get the key. Go back down the ladder, and go down the gap.

Go foreword, enter the room with the two rats, and kill them both. Smash the crystal ball and grab the key. Move foreword and go down the ladder going down. Go past all three flails, and smash the ball.

Jump down the gap, jump in front of the platform in front of the knight, kill the creature, go onto the ladder, climb up it, and get onto the platform. Go down the drop, jump over the spikes, and whack the leaking pipe with the knight's sword. The player should then swim over to the staircase near where the knight was at the start of the checkpoint.

Go to the recently extended ladder (near the bouncing eyeballs), go up it, and hit the pipe with the sword. The water in the area will expand. Go down the ladder, into the water, swim all the way down to the second fish, swim down the staircase, turn around, and swim that direction.

Go down under the two stone walls, and swim past the fish, until a wall is met, then swim up until you get to the ladder. Now, go up the ladder, avoid the fireballs, and get to the knight firing them.

Now, kill all four knights. A helpful tip for this battle is that, when the player's knight attacks a single enemy knight, run away from that attacked knight. In a case with being cornered, keep attacking. Three of the Knights will yield Turkeys, grab them if the knight has two or more health.

When the knights are defeated, run onto the candelabra. When the Knight has reached the ground, kill the hands if the knight needs health. Now, go up the long ladder leading to the pipe near the picture, then go down. The entered room will feature a picture with a white knight, who will immediately come out of the picture, commencing this mini-boss fight.

Now, go down the ladder in the platform the knight is on. When the player goes down, watch out for the skeleton, try to get behind them and try to kill them. After that, go foreword and hit the statue Holding the torch. Now, go back, and go onto the second ladder. Go up the ladder, up the stair case, but wary of the nearby skeleton. Kill the skeleton, run foreword, and hit the statue holding the torch. Three walking fireball enemies will emerge out of the shadows.

The knight will now be on fire, this is good (the player will be on fire, but not invincible, and will not be able to burn enemies with a touch of their body). Now, kill the other fire above the knight, then the other forward in front of the knight. The player would have probably realized a blue crystal ball, this is needed later in the game.

The knight has to now light up all the torches. It is best to light up the dungeon torches first, the area with the two fire enemies second, everything else third, and the place with the second blue crystal ball last. When the player goes into the dungeon, kill the serpent the knight finds, and the skeleton. Now, go foreword, up the ladder, and slay the skeleton.

It is now safe to run about the Castle lighting the torches, as the player cannot sustain any damage from enemies, as they are all dead. When the eighteenth torch is lit, the light for all the castle will return.

(If the player starts near the four pictures, move the knight over to the second blue crystal ball) Go up the ladder near the knight's left, go across the water, and smash the two walls. Now, enter the room, jump onto the platform in front of the knight, then the other, then jump onto the other platform. The player should grab the key, and exit the room. Now, enter the room, but remember to avoid the flail.

when in front of the skull). When the knight comes out of it, go and kill the serpent and go up the ladder.

Hitting it will extend a ladder down. Climb up the ladder, go right, and jump up all the small platforms. Now, jump up to the big platform in front of the knight, avoid the fire ball-shooting knight, and jump down the platform with the ghost. Now, move the knight down to the treasure chest, and hit it.

The final checkpoint in Tiny Castle. The player must now kill the armoured knight. Now go up the ladder, up the staircase, and avoid any attacks. When its head starts flashing white, go over and hit it.

It attacks with shooting fire from its hand at the knight, shooting a large purple blast from his helmet, bringing purple glowing boars down on the three closest platforms to it, and approaching the player. Hit its head three times to kill him.

A few months prior to Tiny Castle's unveiling, Mat and Jon Annal revealed an image of a the startup of upcoming game[1] at the Flash Game Summit 2010 in San Francisco. Due to Mat and Jon Annal not knowing this was being broadcasted on a live stream on the GDC website, this image was accidentally leaked to all who were watching.

Mat later said that the event was not intended for fans, and was an industry event.[2]

Swimming in the air glitch

If the player presses the 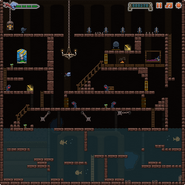 The swimming in the air glitch 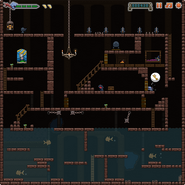 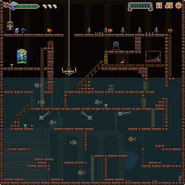 The player with three gold keys, using the swimming in the air glitch. Note that the player can get behind the fire shooting knight by passing through the one-block high ceiling.

An animation of the glitch
Add a photo to this gallery

There is a glitch where if the player mutes the music, presses pause, unmutes the music, and closes the pause menu, the music will be playing twice at the same time. To fix this glitch, the player has to refresh the page the game is being played on.

If the player clicks multiples times the Continue button during on pause menu, the music will be played many times at the same time, causing the sound to be very loud. To fix this glitch, the player has to refresh the page the game is being played on.

There is a solid invisible block next to the door under the wizard's room. The player can stand on it and be blocked by it like a regular wall, except it is invisible.

The knight running on top of the invisible block

The block grid with the invisible block in red

The invisible block disappears underwater
Add a photo to this gallery

If the player has already broken a green crystal ball, pause the game, then resumes the game, the breaking animation will play again. 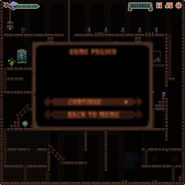 The glitch. Note the green crystal ball on the left.
Add a photo to this gallery

In some cases before a change in the castle occurs, enemies will remain frozen in place, but can still be killed and are able to damage the knight. A part of the enemies' animation will play, but they will not move at all. This glitch can also affect hazards like the fireballs. When the knight triggers an event such as breaking down a stone wall or activating a speech bubble, all enemies and hazards on screen resume their normal behaviour.

Also present in the game's code is a single frame for a fireball with a face. As this frame exists without any other frames similar to it, it may have been part of a scrapped idea of fireballs having a face. Notably, the fireball's face appears differently, as if turned to the side.

The sprite of the walking fireball without arms or legs

Retrieved from "https://nitrome.fandom.com/wiki/Tiny_Castle?oldid=205214"
Community content is available under CC-BY-SA unless otherwise noted.