Hunt down Dracula with your deadly turn based stakes

Turn-Undead is a Halloween turn-based game released on October 7, 2014 as a browser game, on October 25, 2017 on the App Store, and November 1, 2017 on Google Play. The player controls a vampire hunter who is in search of his evil nemesis, Dracula.[2]

Gameplay in Turn-Undead is similar to other Nitrome puzzle platformers such as Dirk Valentine and the Final Ninja series. However, the player can only move in sprite-wide increments, known as 'turns', and everything else on the screen - enemies, projectiles, and platforms - move only when the player moves in these turns. The player also carries two golden crossbows that fire wooden stakes, which kill most of the undead enemies in the game, but also abide by the turn-based movement style. They can be fired at certain walls for use in climbing.

In each level the player can pick up a cross that doubles the amount of points the receives at the end of that level, though this cross is often position in difficult to reach areas.

Level 1 introduces crosses and vampires. To completely the level the player should jump over a platform to climb a ladder and then proceed right while jumping over all obstacles in their way. To collect the cross in the level, the player should shoot stakes into the platform with the cross on it to create a ladder which they can use to climb up and take the cross.

To complete the level, the player simply needs to climb down two ladders while shooting enemies they come in contact with, shoot stakes into the platform on which the exit is placed, climb up those stakes and walk into the exit. To collect the cross in this level, the player needs to shoot stakes into both walls near the exit to create a ladder then use the head of one goblin to climb up the ladder for the platform which contains the cross.

Level 3 introduces movable objects, buttons, and gates. To complete the level the player needs to push the crate to the wall, hop on top of it, fire a stake to get on top of the platform, and then fall downwards. The player then has to go right a climb a ladder with the option of either killing or avoiding the enemies they encounter, jump over the side of the platform, push the nearby pumpkin onto the button present in the level, climb up a ladder, fire stakes into the wall to get to the gate, and then fall through the gate and walk into the exit.

To obtain the cross in this level, the player needs to get to the area with the pumpkin, fire a stake into the platform above the pumpkin and go upwards, then climb down the ladder and touch the cross.

Level 4 introduces doors. To complete the level the player needs to proceed right while either destroying or avoiding all vampires in their path, shoot stakes into the wall on the far right to make a ladder, climb up that ladder, jump to the platform on the left, and walk into the exit. To collect the cross in this level the player should fire three stakes into the wall and climb up them, use up turns till all vampires are on the ground, walk on top of one and use it to get to the raised platform, jump up and fire a stake into the platform, and use that stake to get to the raised platform and then touch the cross.

To complete level 5 the player needs to proceed forward and jump over top or kill the nearby zombie, fire a stake into the raised platform, then climb upward to get onto the ledge on the raised platform. The player then needs to either kill or avoid the vampire, jump over a ledge, kill or avoid the next vampire, and then go over the side of that platform while either timing to land on top of the zombies below or avoid them. The player then needs to jump over top of the zombies (achieved by jumping onto the head of one then jumping again and moving one space forward), use stakes as a ladder to climb up the far right platform, and walk into the exit.

To obtain the cross in this level, the player simply needs to kill the zombie near the raised platform when they are close to the enemy, walk over and touch the cross, then kill the zombie again and complete the level. 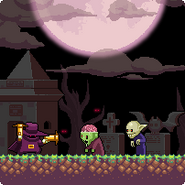 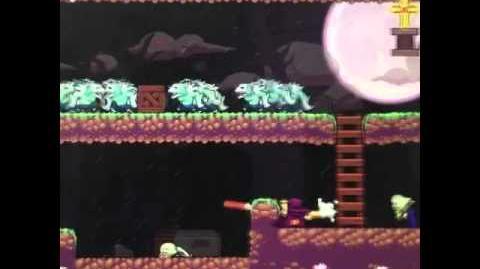 Turn-Undead took 6 weeks to develop.[1] The angels in the game were based off Boos from the Mario games and Weeping Angels from Doctor Who.[8]

中文
Community content is available under CC-BY-SA unless otherwise noted.