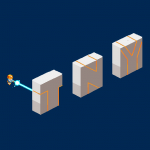 Hello, <insert name here>. I am TNY and used to be The Nitrome Yeti.

I live in South America and am a nitromian.

I mostly like to help adding images and making small fixes in pages, but I most likely do not have time to edit. Sometimes I create missing articles, where I add my own images.

Getting introduced to Nitrome

Back in 2007 I used to watch MTV pretty often, as then the channel would actually show music videos (as opposed to nowadays: they show everything but music videos). One day, I was eventually checking out MTV's website, where I discovered the MTV Arcade section. This page contained several links to games and one of them was called "Toxic", which reminded me of a song titled the same way, so I started playing it. As I showed it to my sister, she suggested entering to the Nitrome.com website and as I did, I soon started getting involved with Nitrome.

One boring day I was browsing random stuff so I googled Nitrome. The second result read "Nitrome Wiki" (I was certainly clueless about wiki's at that time) so clicked the link. As I began going over articles, I noticed the Edit tags next to every heading title. I came back another day and found the Everyone can edit! text so I signed as The Nitrome Yeti. I cannot explain why exactly I had selected that username, but the idea of calling myself a yeti came to me since I loved Snow Drift and the winter. The first user I met here was NOBODY, who guided me during the earlier edits. My first edit was in the Ribbit page because I was really obsessed with Ribbit back then. A couple of days after that, I saw that the Merge-O-Matic article was lacking an image, so there is where my first image contribution came from.

I've beaten 98 games so far. I may have beaten Powerup as well, so then I would've beaten 99 but I'm discounting that game since I can't really remember if I actually managed to beat it. I know I had gone quite far and even got to the last level, what I don't remember is to have beaten it.

NOTE: Occassionally, my game saves were ramdomly reseted one day, which affected all Nitrome games unfortunately. However, I will list all of my beaten Nitrome games (before and after the loss) as I remember and have taken note of every game I completed.

I work on my own games using pixel art. Below are some animations I made for games. I made their full design, and animation.

Retrieved from "https://nitrome.fandom.com/wiki/User:TNY?oldid=188036"
Community content is available under CC-BY-SA unless otherwise noted.