One blow (MI); Varies depending on gun (NMD)

The warlock is the main character in the game Mirror Image. He is a male wizard, who is trying to liberate his homeland from enemies. He also appears in Nitrome's 100th game, Nitrome Must Die.

The warlock is dressed bizarrely, wearing a headdress which is the skull of a ram[1] with a purple feather on top, encrusted with a ruby, he is wearing purple clothes and a purple cloak. Due to being shaded or some other unknown history, his skin is green.

The warlock's house was invaded by black and white coloured demons. His home was pulled apart, and many things did not work properly; the bottom of his home being right above a purple vortex. The Warlock set out to reverse the effects of his home.

The warlock uses his staff to teleport from place to place. He will die if he falls into the void or comes in contact with any enemy, enemy attack, or hazard.

The warlock appears as an enemy in Nitrome Must Die. He is the cause of a dangerous glitch which heavily slows down the level. He only appears once in the game, appearing in one level in level set 71-80. When the Warlock appears, it attack by firing several purple orbs that rotate around the player, soon hitting them.

After this, the warlock teleports to a random platform in the level, again firing before teleporting. The warlock is unable to walk with his feet, and relies on teleportation. Due to them being unable to walk, and being completely stationary when visible, they are open for attack most of the time. Warlock has low health, and can be easily destroyed if they are shot fast enough.

There is a very dangerous glitch in Nitrome Must Die caused by the warlock, and the first glitch on Nitrome Must Die to be heavily complained about by fans. In the level with the Warlock, the game was programmed to slowly enter a warlock, so that there would eventually be ten warlocks.

This caused the game to heavily lag, to the point that the player could actually be killed by the overwhelming amount of purple orbs. It was still possible to complete the level, and with the pistol, only the player has to keep the Warlock population in the level to two. This glitch was soon fixed by Nitrome on November 28th, 2011[citation needed].

The warlock is armed with a golden staff which holds a red sphere in the middle. When the warlock sees where he wants to go, he can bang his staff down, and disappear in a wisp of purple smoke, reappearing at his destination. 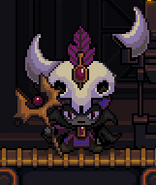 The warlock in the icon of Mirror Image

An avatar of the warlock

Retrieved from "https://nitrome.fandom.com/wiki/Warlock?oldid=202645"
Community content is available under CC-BY-SA unless otherwise noted.